In 1997 the process of demonopolisation of the Polish electricity market was commenced. It led to its division into particular areas: generation, transmission and distribution and trade in electricity.

With time, in order to hedge the supply chain for the area of generation the largest power groups widened its operations also with the area of mining.

Poland is the largest producer and sales market for bituminous coal among the European Union states. Bituminous coal in Poland, in the perspective of the next ten-odd years, will be the material which is the most used for the generation of heat and electric energy.

Bituminous coal, for heating purposes, is mined in Poland mainly by the entities controlled by the State Treasury. They in particular include Jastrzębska Spółka Węglowa SA, Kompania Węglowa SA, Katowicki Holding Węglowy SA, Polska Grupa Górnicza sp. z o.o., Tauron Wydobycie SA. Apart from the entities with the State Treasury shareholding, in recent years the significance of private or privatised mines has grown in the area of mining.

Most of electricity on the Polish market is generated based on conventional fuels, i.e. bituminous coal and lignite. However, during the recent years the awareness grew in Poland in relation to the environment damage caused by conventional energy, and membership in the European Union was an additional impulse to restructure the Polish energy sector.

Renewable energy is obtained due to natural and repeated processes. Pursuant to the Energy Law in the generation process a renewable source of energy uses wind energy, sun light, aero thermal energy, geothermal energy, hydrothermal energy, energy of waves, currents and tides, lower levels of rivers and energy obtained from biomass, biogas derived from waste depots, and also biogas generated in the processes of disposal or treatment of waste water or decomposition of plant and animal remains.

Development of electricity generation from renewable sources results from the need to protect the environment and enhance the energy security. The goal of these activities is increasing the volume of energy generated from renewable sources, technology development and innovation support, creating possibilities of regional growth and greater reliability of energy supplies, especially on a local scale.

The obligations resulting from e.g. 3 x 20 climate package include Poland's duty to obtain 15% share of RES in energy consumption until 2020. Pursuing the growth of this share in the electricity production balance in Poland, due to high investment costs, requires using relevant support systems, being the guarantee of their regular development.

Pursuant to the Energy Law, performing business activities within transmission or distribution of electricity requires obtaining a licence from the President of ERO. Key distributors of electricity in

Trade in electricity on the contract market is performed based on bilateral contracts (agreements) concluded between energy producers and companies trading in energy and end Customers.

The exchange market includes trade on the energy exchange (Polish Power Exchange). Trade in energy on PPE is performed mainly on the so called Day Ahead Market (DAM). DAM is conducted as at the date preceding the day on which the physical delivery takes place.

The Balancing Market is a specific area of the energy market, on which the differences between the transactions concluded among particular market participants and the actual demand for electricity are balanced. 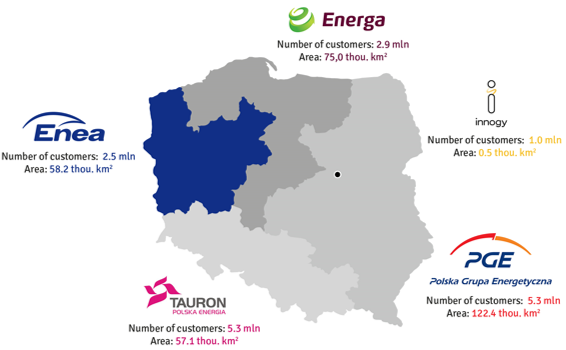